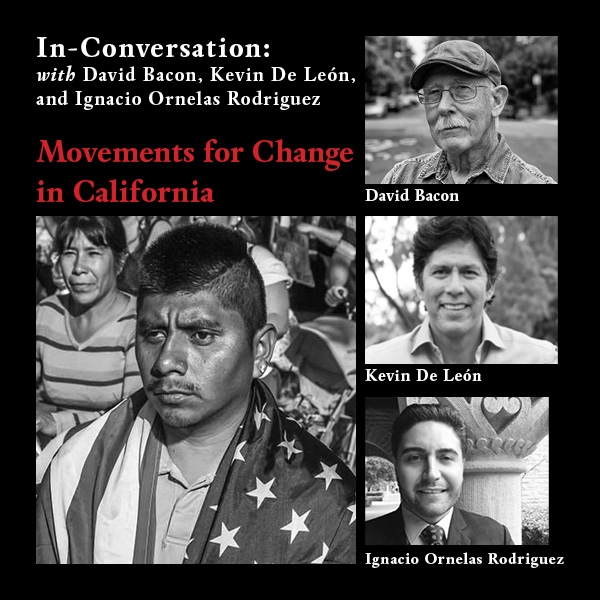 RSVP for this event

Stanford Libraries invites you to a conversation with photojournalist David Bacon, Los Angeles City Councilman and former President pro Tempore of the California Senate Kevin de León, and Ignacio Ornelas Rodriguez, Ph.D. to commemorate the opening of the exhibition Work and Social Justice: the David Bacon Photography Archive at Stanford.

This talk will explore social justice movements in California including advocacy and electoral politics. David Bacon’s photography captured social movements in California during an economic transformation.  As the state entered an economic recession in the early 1990s, labor unions witnessed major losses, and wages for workers stagnated. During this period, California also witnessed nativist and anti-immigrant sentiment across the state, labor leaders organized strategically and led large protests, most notably millions marched to protest the rhetoric in 1994 and 2006. Bacon’s photography captured the labor, the movement, and organizers who led the immigrant rights movement.

David Bacon is a California-based photographer, writer, social activist, and union organizer. He has dedicated most of his career to documenting labor history. In the mid-1980s, he began working as an independent photographer and journalist documenting the lives and social movements of migrants, farm workers, and communities impacted by globalization. He has written several books and numerous articles about migration. His most recent book of photographs and oral histories, In the Fields of the North/En Los Campos del Norte, was published by the University of California Press and the Colegio de la Frontera Norte (Tijuana), 2017.

Kevin de León is President pro Tempore Emeritus of the California State Senate and the Los Angeles City Councilmember-elect for the 14th District. As leader of the Senate, he delivered landmark gun-safety legislation, clean-energy mandates, environmental protections, and immigration reform. Before politics, Senator de León served the public as a community organizer, taught ESL and U.S. citizenship courses, and advocated for public schools. He was elected to the Los Angeles City Council in March of 2020 by an overwhelming majority and will take office on October 15.

Ignacio Ornelas Rodriguez, Ph.D. is a historian who conducts research on civil rights, social justice movements, and electoral politics. He works in the Department of Special Collections and University Archives at Stanford.

This talk is hosted by the Stanford Libraries Department of Special Collections.