Saying ‘Latinx’ isn’t about being politically correct, it’s an invitation to be inclusive 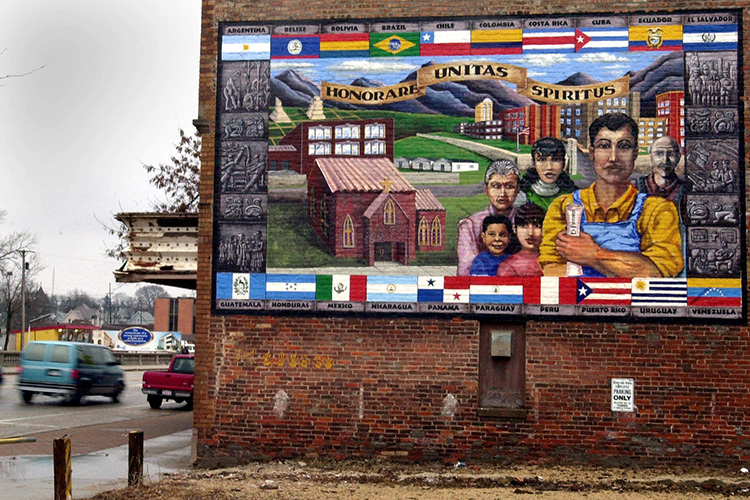 “Latinx is just a word that is reaching for a better way to capture the diversity within Latinx cultures and Latinx people,” said professor Laura E. Pérez. “If it ends up largely becoming a homogenizing marketing tool, people may find a new term.” (AP photo by Stephen J. Carrera) “It’s capturing a transformation,” said Pérez. “When we use Latinx in our classes, in our building or research center names, and in our daily language, we are representing our observations of the changing social world around us. And we are performing the desire to be more inclusive, by enacting inclusivity through our language use.”

As chair of Berkeley’s Latinx Research Center (LRC), Pérez helped to rename the center from its previous name — Center for Latino Policy Research — three years ago and has since grown membership and participation on campus. Students affiliated with the center recently launched a podcast exploring the term Latinx.

Pérez recently spoke with Berkeley News about the potential limitations of using the term, the perils of political correctness and how language continues to evolve.

(This interview has been edited for length and clarity.)

Berkeley News: A recent UC Berkeley Institute of Governmental Studies (IGS) poll found that 25% of U.S.-born Latinos identify as being Latinx. The majority of respondents used Hispanic or Latina/o. Why isn’t the term used more?

Laura E. Pérez: When we look back at the words Black, Chicano and queer, they were pejorative within a racist and homophobic dominant culture. Until a small group of people started to struggle over their meaning, redefine and persistently use them — and signaled a politics of greater democratization of American culture — people didn’t want to be associated with them.

Sometimes negative reactions to new terms like Latinx are based on the assumption that ivory tower scholars, or a small group of activists disconnected from the rest of society, make those words up. In my own experience, I first heard Latinx being used by queer, non-binary students as a way to linguistically perform and promote gender inclusivity.

I think the use of Latinx among younger generations and academics reflects both how change begins small and how, if it’s meaningful, it will spread.

Then, what is the job of scholars and intellectuals when using and circulating new forms of language?

The job of intellectuals is to pay attention to the world, and for some of us, it is to see whether there are new trends that are emerging, new population groups, new politics, new sensibilities and sentiments, and to analyze the meaning of these in an informed, responsible way.

“Latinx reflects the desire for non-binary and non-cis gendered people to not have to identify as [Latina/o].”

If a term like Latinx begins to circulate and is used increasingly, then it might reflect what our society is starting to value more broadly. When we use Latinx in our classes, in our building or research center names, and in our daily language, we are representing our observations of the changing social world around us. We are performing the desire to be more inclusive, enacting inclusivity through our language use.

But the emergence of this term, for some people, may feel superficial — like a new form of “political correctness.”

What would your response be to someone who believed that was true, that the use of Latinx is just “woke” political correctness?

When people criticize “P.C. culture,” they’re often trying to indicate that they feel they’re being policed by progressives, and they may feel defensive about the criticism of the older terms they already thought were “woke” back in their day. It may take time to show them how received terms may also have carried with them Eurocentric or Hispano-centric racism, classism, sexism, homophobia or cis-gender normativity.

“The use of the term Latinx is an opportunity to approach history with an open mind.”

So, I would respond to those criticisms by expressing that the use of the term Latinx is an opportunity to approach history with an open mind. Latinx histories have been marginalized, ignored and suppressed. The term reflects the desire to broaden awareness about historically newer or lesser examined communities.

In this sense, the “x,” in Latinx, is also about the unknown past and complex present of the diverse Latinx community.

Latinx also seems to be used more by younger generations (40 to 50% according to the IGS poll). Why do you think that is the case?

Some people from older generations worry that Latinx might be an umbrella term, like “Hispanic,” that homogenizes people in a depoliticizing way. They also worry that the hard-won anti-racist struggles that helped to further democratize our country might be viewed as no longer relevant.

But the reality is, inequity for the majority of Latinx people still remains.

Berkeley News is examining racial justice in America in a series of stories.

Younger generations, especially from global or very multicultural cities like Los Angeles, New York or San Francisco, are increasingly mixed themselves and politically identify also as multicultural or multiethnic, and as Indigenous, African diasporic or Asian.

It makes sense that they are looking for more complex ways to think about their identities.

But today, Latinx is just a word that is reaching for a better way to capture the diversity within Latinx cultures and Latinx people. If it ends up largely becoming a homogenizing marketing tool, people may find a new term.

So, Latinx is not the end-all term?

I don’t think we should be so attached to any one word. It’s good to be willing to see what language is mapping at this historical and cultural moment, but also what will emerge in the future, to represent its own moment more effectively.

But these umbrella terms are often used to build power and coalitions across the different communities. Do you think continuing to change the language from Hispanic to Latino and now to Latinx and so forth will impact that power?

Neologisms such as Latinx are a sign of social, cultural and political changes. The term is capturing a transformation, and it doesn’t matter that it is beginning with a still smaller percentage of people. What matters is whether what it is trying to represent and encompass speaks to people more effectively than the older terminology it means to further nuance.

Check out the full article on the Berkeley News site here at: https://news.berkeley.edu/2021/10/12/saying-latinx-isnt-about-being-politically-correct-its-an-invitation-to-be-inclusive/